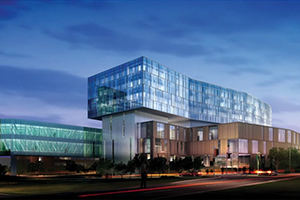 Description: The University of Kansas Hospital Authority Board has voted to add four floors to the Cambridge North Tower, KU announced Monday, confirming talk of possible expansion when the project was announced in 2014. The $270 million project originally was planned as a seven-story building with 92 beds and a dozen operating rooms. The four new floors — to be finished in 2018 — will add $50 million to the tab, making the project at least $320 million. Construction kicked off in March on the first seven floors and is less than half complete.

Do you have a project that showcases Griswold Controls products?

We would love to feature you! Submit a contact form with project details so we can feature the project on our website.

Have a question about this or another Featured Project? Fill out the form below and someone from Griswold Controls will get back to you shortly.